Pete Rose’s Story is quite popular among most sports betting pros. Firstly, let us give you a background of sportsmen being involved in this casino gaming activity.

Due to the widespread legalization of sports betting since the Supreme Court overturned PASPA in 2018, some people are concerned about point-shaving or fixing. Bookmakers, on the other hand, are often the first to notice if something suspicious is going on with a sporting event, and in such cases, all betting lines are shut down. There’s also the argument that today’s professional athletes earn far too much money to be enticed into match-fixing. 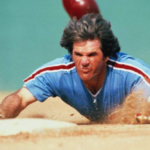 Who is Pete Rose?

With 4,256 hits, Pete Rose holds the record for most hits in baseball history. In addition, he holds the Major League Baseball records for most career games (3,562) and at-bats. (14,053). Rose is also unique in that he is the only player since the Black Sox era who has been banned from baseball and sadly the Hall of Fame, because of gambling.

How the Scandal Began

In 1989, MLB Commissioner Bart Giamatti hired John Dowd to oversee an inquiry into accusations that Rose had gambled on baseball and the team he managed, the Cincinnati Reds. The 225-page Dowd Report included proof that Rose has wagered on baseball since at least 1985, when he was a player/manager for the Cincinnati Reds. Phone records and statements from roughly 40 witnesses, including a bookmaker, were included in the study.

What Was the Verdict

Rose acknowledged that he was indeed betting on other sports. But, he rejected betting on baseball during the period. Despite this, he agreed to a lifetime ban in 1989. Rose ultimately confessed to betting on baseball many years later, stating that he only ever gambled on his own club to win. However,  the Dowd Report revealed that Rose did not always bet on his own team, creating more doubts about his honesty. He has made many requests for his ban to be removed, but to no effect. As a result, Rose is also ineligible for the Hall of Fame.

Who is Pete Rose?

Why Was Pete Rose Banned From Baseball?

Rose was banned from baseball for betting on the sport, an illegal act in the sporting industry.